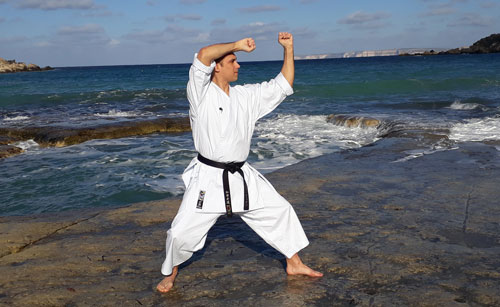 One of the UK’s foremost self protection and practical karate instructors, John Titchen is best known internationally for his highly acclaimed safe self defence scenario training and his critically acclaimed books and blog on traditional karate kata application and self protection.

John’s books, articles, youtube videos and seminars are recommended worldwide by the growing number of groups and individuals looking to enhance their training through a pragmatic and safe approach to effective self defence.

John gained his first Black Belt in Shotokan Karate with the English Shotokan Karate Association in 1995 under Shihan Roger Hall 8th Dan. A former University and Secondary school teacher and co-curricular education specialist, he has nearly 30 years experience of teaching in the field of martial arts and self protection. John has taught seminars in Canada, Europe and the USA.

In addition to his Qualified Teacher Status John has a number of different coaching qualifications and Dan grades in Shotokan Karate and AoDenkou Jitsu. John is also registered as an instructor with the British Combat Karate Association and has Dan grades with them. John has a passion for research and has shared his knowledge in interviews with magazines and podcast channels. He is a former regular columnist for Traditional Karate Magazine and the ezine Jissen. John is also recognised as one of the leading providers of safe scenario training for self defence in the UK. You can read more about John on his personal website here.

John has an enhanced DBS, undertakes regular safeguarding and child protection training, has up to date first aid qualifications and is fully insured.

Written in 2004, John’s first book Heian Flow System: effective karate kata bunkai was published in 2007. In 2014 and 2015 John published his internationally best selling four part book series Pinan Flow System: karate kata application for beginner to black belt and in 2016 he published his sixth book: Karate and Self Defence – Thoughts on Training. John featured as one of the guest authors in the 2018 book The Problem of Practical Karate. In 2020 John published Karate Beyond Kata – melting ice into water. John also contributed to the free ebook Rules for Success in Karate in 2020. In 2021 John released Karate and Self Defence – The Reality of Karate and Close Quarter Combat. John’s books are popular in the UK, North America, Europe, South America, Australia and Asia. 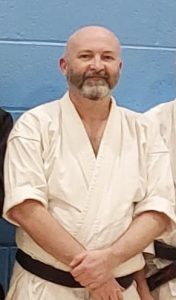 Paul started his karate journey in 1986 when his father enrolled him in the local Wado-Ryu karate school. This early experience has given him a lifelong interest in martial arts and self protection.

After an extended break Paul returned to regular training in Shotokan karate with his eldest daughter. They both qualified to 1st Dan in 2016.  Since gaining his Shodan, Paul has maintained a keen interest in applied karate. Paul enjoys attending seminars and training with instructors who focus on using karate for effective self defence. In recent years Paul has trained with John Titchen, Bill Burgar, Leigh Simms, Graham Palmer, Iain Abernethy, Les Bubka, Don Came, Brian Bates, Robert Davis, Andi Kidd and many other interesting practitioners!

Paul has also continued his own Shotokan training and instructor development. Paul was awarded his 2nd Dan in 2018. In Autumn 2019 Paul started training with the Kyohan Shotokan group on a regular basis.

Paul now splits his martial arts interests between teaching and training Shotokan karate and applied training around the Pinan Flow / DART system. He has an enhanced DBS and undertakes regular safeguarding training.

World class self defence focused karate training based in High Wycombe in Buckinghamshire.
Contact us

This is my third time visiting with John. Excellent session as ever, development of everybody that comes up here. It is a challenge for any martial artist to come and test what they’ve done through… the years, and see how they cope in enclosed environments and tough challenging situations, wearing the body armour just makes it so much more real for people. Fully endorse it. Thank you John. Read more “Fully endorse it”

My son trains with Dr Titchen and from what I’ve seen, his classes are very relevant to the name of the club.

Excellent class based around practical skills for self defence against likely scenarios that most people would see, (without ending up in prison yourself!) Nobody dressing up and playing “special forces” here 🙂 just sound advice… and sound training. Read more “excellent class”

An excellent club to learn how to defend yourself as well as spot and prevent dangerous situations from escalating. Highly recommended for anyone wishing to improve their fitness, learn an extremely effective (and fun!) martial… art and participate in real life scenarios allowing you to see ow you personally perform under pressure. Read more “an excellent club”

I have been a long-term member and have learnt a huge amount about self-defence and how to keep myself safe anywhere.

A brilliant system, school and instructor. Run by a very intelligent, patient and thoughtful martial artist with a wealth of knowledge and expertise, able to mix the influence of other arts when necessary, whilst still… retaining very pure karate form when required. I will always encourage others to go and train at any events involving John and these guys whenever possible! Read more “a brilliant system”

Sensei John was fantastic as an instructor and as a person. His teaching method was structured and pleasant and kept all of us involved and interested throughout.

My second simday, another enjoyable and rewarding day. It reassured many aspects of my training under pressure. It also showed some weaknesses and areas to concentrate on. Again loads to take away. I highly recommend… John Titchen’s Simday, if you want to test what you think you do. Read more “enjoyable and rewarding”

a true understanding of his subject matter

I have been training in the martial arts for over twenty years and have been fortunate enough to have had some very good instructors. It is not often that I am truly impressed by another… instructor, but John Titchen struck me as being on a different level to most. A true understanding of his subject matter, backed up by a very impressive CV. Since training with John and his students I am keen to expose my own students to his training. Read more “a true understanding of his subject matter”

Sensei John delivered a remarkable seminar, leaving us with a deeper understanding of the 5 Shotokan Heian Kata. His knowledge on the subject is staggering, spanning some 25 years of training. His teaching method was… structured and pleasant and kept all of us involved and interested throughout. It was a fantastic experience for all who took part. Truly an amazing experience for us all by a gentleman Sensei who not only shared with us openly an integrated system of Heian applications to make our Karate more complete, but also taught us invaluable life lessons with his example, attitude and indomitable spirit. Thank You Sensei John. Read more “a fantastic experience”

Karate is undergoing a revolution. Not a revolution that uproots the past, but instead one that returns to the past to water the roots of our tradition so that, after decades of stasis, it may… grow and flourish. There is no doubt in my mind that John Titchen is one of the leading lights of this modern revolution (re-evolution?). John is someone who I always enjoy discussing karate and self-protection with. Every time we talk in person or online I find myself reassured by our commonalities and excited by our divergences. John is also someone who, to me, embodies the warrior spirit. Easygoing and thoughtful in nature, but who has a determination and love of what he does that is as infectious as it is inspirational.”
John Titchen and his scenario training is excellent. John would probably be, in the UK at least, the go to guy (for Scenario training). Instructors want to know what they are teaching is realistic, but how can they be sure if they’ve never had been involved in a real situation? Getting involved in real situations is obviously not the answer! So how to we solve the seeming paradox of wanting to gain the vital experience needed without doing anything illegal, stupid or unethical? The answer is realistic simulation training and, for my money, John Titchen is the number 1 guy when it comes to providing such training in a professional, realistic and ego free way Read more “The ‘go to’ guy”

I am the Canadian Director of the Jeet Kune Do Athletic Association and have been involved in martial arts and Law Enforcement for many years now (far too many than I care to mention). John… is someone who I have known for some time now and I wholeheartedly endorse his approach and his teachings. Everyone – especially “seasoned” or experienced martial artists – should train with John any chance they get to see how much of what they know is applicable and more importantly how much isn’t. I don’t endorse many people, and believe me I do get asked a lot; this is one I am happy to offer without being asked Read more “wholeheartedly endorse”